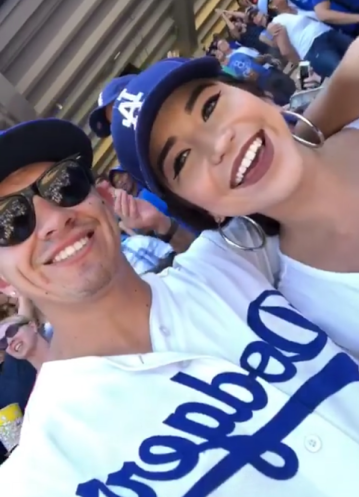 The year the Astros stole the World Series from us was the year I fell in love. He sat at the bartop of our local pub, taking a shot every time Cody Bellinger hit a home run. I was appalled and attracted at the same time.

“Bomb for bomb” he said, and the next thing I know I was chasing Jaeger with Guinness and Irish cream in unison.

We were animated. For the love of our team, for our boys in blue who were going to gives us a title since before we were born. He looked so good in his custom white jersey and his name embroidered on the back with the number 10. I’ll never forget. The Dodgers were hot and our rookie outfielder gave us reason to celebrate. Game after game, we met repeatedly at the bar and every time we went home with each other.

I always think of that one World Cup commercial where couples are shown in the delivery rooms of hospitals expecting their first child. Throwback to nine months earlier and it’s the same couple celebrating their country’s team winning the whole shebang.

I was living it. Sans baby. Sans title.

This post season was truly a special one, not because of Justin Turner’s walk-off homerun against the Cubs nor because of Puig’s bat lick; but because I finally met my match. Someone more theatrical, more exposed to any sport knowledge than I would ever know. The captain-MVP-all star-player to this team of two. The Dodgers became our bonding point.

“He’s so easy to talk to,” I thought and our series opened with a win thanks to our ace. Everything was going right.

His birthday fell on the second leg of the series and what better way to spend it other than in downtown? October is the best month for sports, and I say that as a borrowed statement from my whirlwind lover. We celebrated at the center of it all in LA Live and as fate would have it, the Lakers were tipping off right across the street. The Dodgers were up in the sixth inning and out of drunken confidence we left the restaurant we were at and bought tickets to the basketball game.

All of Staples Center were watching the Astros come back from a two run deficit. You either saw the game from the televisions in the suites or on the apps of others’ phones. For a moment you almost forgot that you were at the Lakers game because the crowd was cheering for base hits during regular timeouts. Nothing was greater than seeing fellow Angelenos share the love for both teams and seeing my own love develop for this  fascinating man. As I sat beside him in the stadium, I felt my heart growing three sizes that day.

I blamed the Game 7 loss in the World Series on him. He is notoriously known for bringing bad luck to our teams every time he’s in attendance, and he was at Dodger Stadium that day.

Turns out, it was just the no good-dirty-rotten- sign-stealing Astros fault. I have since forgiven him.

The day that Lebron James became a Laker we playfully then aggressively bantered over LBJ and Kobe Bryant. Don’t get me wrong, I am loyal to the purple and gold but Lebron was my guy after he rebuked “shut up and dribble.” He bought me my own white jersey and took me back to downtown where it started.

With a last name like Figueroa, how can he not be attached to Staples Center?

I learnt of Kobe’s passing through him and we shared an unrecognizable grief together. Time stopped, traffic remained frozen, and the heart of the city was gone.

At our best we were perfect, but at our worst we were a disease.

The last day I saw him I knew the relationship was over. I had gone to his house after a soul cleansing hike through Griffith Park. I needed air, my mind losing touch with reality. He stood there somber in his hallway and my gut already sank to the bottom of the floor.

I cried until the tears couldn’t pour out any longer as he painfully told me that he was unhappy. For the first time in two years we couldn’t look each other in the eye and somehow our match made accord wasn’t enough anymore.

It wasn’t a perfect relationship but he was easy to love. Together we never shared a winning season but had a good run. In retrospect, it was great while it lasted, but I hope the Dodgers and Lakers will see better days than us. For the love of the team.

Professional human being, unprofessional writer. Short and sweet descriptions of my current disposition based on the alignment of the planets. Los Angeles and New York and everywhere in between. View all posts by jilliansalas